I have a rat that will not go in my trap. I’ve tried everything and he won’t go near it. I caught 3 and thought they were gone but then a week later, found more droppings. I set my trap right where I’m seeing the droppings but he won’t touch it. I’ve tried peanut butter, chicken livers, applies, marshmellows and fish heads. Any ideas? My cat seems to know where he’s at like sometimes he must be in the wall but mostly seems to like our kitchen and laundry room. I was hoping the cat was gonna catch him but that doesn’t look like it will be happening anytime soon so I need help.

Rats, mice, voles and other small rodents will quickly learn to avoid kill traps once they see a few of their friends get caught and killed. To overcome this issue, you need to “step trap”.

Step Trapping is basically a process by which you make the rodent “comfortable” accepting food in close proximity to a trap. It’s a process that takes time but its a proven method so if you have wary, skittish animals that won’t go near traditional snap traps, you need to make a change.

To Step Trap effectively, get our PECAN PASTE. This is our Trappers Choice brand made with all natural nuts they cannot ignore.  Get a jar and once received, plan on using it several nights in a row to effectively “feed” your unwanted visitor and make them comfortable. This might sound odd but once comfortable, they’ll be easy to catch.

The process of Step Trapping is done with Pecan Paste using small amounts. Placements should only be 1/2 teaspoon and the more the merrier. A bottle cap will work quite well at holding the needed amount you need to set out. Plan on making 3-5 placements. These should be made where you have found droppings, seen rodents or evidence where rodents have been active. Common areas for these placements include attics, garages, crawl spaces, behind appliances (stoves or refrigerators), pantries, linen closets and laundry rooms.

Make the placements mid day and leave them alone once set out meaning do not inspect them until the following morning.

If you find any offering was taken overnight, it means you now have a spot where a rodent is comfortable eating. Rebait the trap and see if they take your second offering. In most all cases, they will return nightly once they get a taste of Pecan Paste so its highly likely your second offer will be taken as well.

When ordering our Pecan Paste, you need to order at least one of our LT3310 LIVE TRAPS. This trap is well suited for catching small animals like mice, rats, voles, chipmunks, flying squirrels, gray squirrels and more. Its a live trap and as such, does not include harsh springs or “tension” rodents can feel and notice. After any one bait placement is taken twice, its now time to “step up” your offer by adding the Live Trap alongside the bait. Mind you its not time to use the trap, just time to get it out where the rodent is feeding. This will allow the rodent to get comfortable seeing it.

So for the third bait placement, you’ll use the same plastic bait holder but you will add the trap alongside the bait. DO NOT PUT THE BAIT INSIDE THE TRAP. Instead, push the door of the trap open and leave it in “set” mode but do not put any bait inside. The goal here is to get the rodent to feed while being able to look inside the trap. The trap door can be “taped” to the roof of the trap to keep it open. Duct tape can be used as the door is spring loaded and naturally wants to close.

Once your third placement is accepted, it means your rodent is not afraid of the trap. Now make another placement of pecan paste just inside the trap,  basically on the trap door as it lies down, so the rodent must enter the trap a little bit to get their reward (the much coveted pecan paste).

And once this offering is accepted, you’re now ready to finally make a real, live set and catch this pest.

For the final set, place a full teaspoonful in the bait holder and set it behind the trip pan of the trap. way in the back. Make sure the trap is working right by testing it. Do this by setting the door open and then using a pen, screwdriver or your finger, see if it closes nice and tight when you press on the trip pan located in the mid section of the trap body. 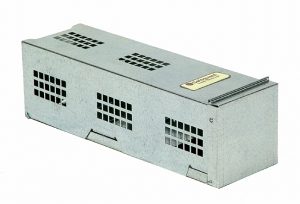 This sequence of trapping may seem tedious but its highly effective and works every time when done properly. Rodents cannot resist Pecan Paste once they get a taste. And the live trap does not present a visual threat to them; if anything it looks like something they’d like to enter since its a small, tight space they naturally “like”. In the wild, rodents naturally seek tight spaces to nest and this live trap presents a comfortable looking home to most any small animal.

One last thing. Once you catch this “singular” rodent, do not give up. Start over. Make another 3-5 placements of nothing but Pecan Paste and see if there is some other animal in the home still needing to be caught. If so, proceed as detailed above. Only when you go a full 2 weeks with no pecan paste being taken should you remove the free food, clean up all their mess and seal up access holes.

At that time its strongly suggested you spray your homes exterior with NNZ. This odor neutralizer will remove all the scent trails rodents use to gain access to your home. NNz should be applied to foundations, siding, attics, crawl spaces, along fence lines and basically anywhere rodent trails, feces, urine or chewing was found.

NNz will not hurt plants, grass, people or the environment; its merely an odor neutralizer. Remember, rodents don’t “see” your house as a place to live. What does happen is they find old scent trails and follow these “scent highways” to access points that lead into living spaces. If you remove these highways, you’ll remove the risk of another animal getting inside.

To treat with Nnz, add 8 oz per gallon of water and expect to get 500-750 sq/ft of coverage per gallon when spraying. You can also wipe down NNz with a sponge, rag or mop. 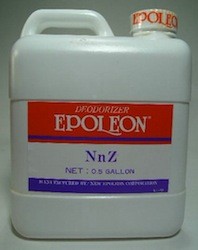 More on HOW TO STOP RODENTS FROM COMING BACK TO MY HOUSE can be read in our article here: