Camelback Crickets can become a pest in and around the home. Most pests want to live where people live, but these crickets are different. They love dark, damp, cave-like settings where they can nest. These environments need to provide both water and food. Camelback crickets can live in a home for long periods of time without residents knowing. As their population increases, some will get into living areas. This will prompt the homeowner to treat. Before we discuss methods of camelback cricket control, its important to understand some basic biology of this pest.

Camelback crickets appear throughout most of the United States. They will move into areas around the home taking up residence under porches and sheds. They love moisture and darkness. Such areas produce fungus and mold – both of which can feed this species of cricket. In addition to mold and fungus, camelback crickets will feed on fabric. This becomes a problem in the home since migrating crickets can cause substantial damage if left unchecked.

Once crickets are established around the home, they’ll readily move inside for shelter from the hot summer heat. Crawl spaces and basements provide excellent nest sights. If you’re finding some in your basement, treat sooner rather than later. Its far easier to get control of this cricket before its established.

If you have a home with a crawl space, its important to check it periodically. Such inspections may reveal pest problems. And if you find crickets during any inspection, try to treat right away. Since camelback crickets reproduce quickly, its wise to get rid of them before populations swell.

Once their population gets large, they’ll migrate up and out of crawl spaces and into living areas of the home. This is disconcerting to residents since this cricket is very different compared to its cousin the common field cricket. Camelback crickets have long antennae, huge hind legs and a strong looking body. 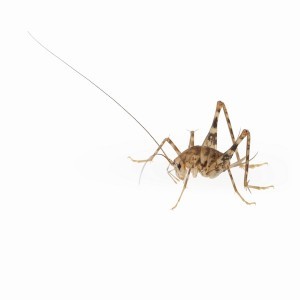 Since camelback crickets grow large, many people are surprised at how big they can get. Another unique feature of this cricket is that they jump randomly and are more likely to jump at you than away from you. Its believed this is due to how they see. Their vision is such that it appears to them they are moving away from a potential predator but in fact they are moving towards it. Some behavior will in fact spook some predators leading scientists to conclude its evolved this way for defensive purposes.

Another problem with letting camelback cricket populations going unchecked is the potential for fabric damage. They love to eat both synthetic and man made material including rugs, furniture, books, canvas, clothing, boxes, linen, drapery, and just about anything we have in our living area. This can lead to damage which looks like some type of moth.

Because camelback crickets are rather large and meaty, mice and rats are fond of them. Many times rats and mice will take advantage of populations which are active in the home. This could lead to rat and mouse infestations and in turn, require more even pest control! Because of problems associated with letting cave crickets live in the home, its wise to take action and stop local infestations.

If you think you have this cricket getting into living areas because you’ve seen droppings or damaged fabric, set out some GLUE TRAP MONITORS. They will readily attract crickets because they provide the type of shelter camelback crickets like. If you catch one every few months, there isn’t much of a problem. However, if you are catching one or more a week, it is time to start doing some cricket control.

Traps should be spaced 10-15 feet apart and will generally remain functional for 3 months.

Camelback cricket control is usually easy to achieve. The key is attacking them where they want to live. Since they start from the outside, its recommended you control outside populations. The best way to do this is with concentrate we carry called BITHOR. This low odor material mixes with water and treatments will last 30+ days.

Simply spray foundation walls, around windows and doorways, under decks or sheds and in mulch or other dark, moist areas.  Be sure to create at least a 5 foot band barrier both up and out from the home. So at least 5 feet up (higher if you have elevated decks since they love living under the decking) and at least 5 feet out into turf, pine straw, etc.

Any structure close to the home which may be harboring crickets should be treated thoroughly to. By controlling them outside, you’ll be stopping the migration that will naturally happen into the home. Expect to use at least 1-2 gallons of mixed spray every month till the problem is gone. Bithor combines two actives which work together in a special way. It will both kill quickly AND then provide a non-repellent killing action that can last over a month. This feature is important as it won’t spook or chase them around. The crickets won’t detect this active so they end up moving through it, picking up a lethal and dose and dying without having a chance to survive.

Add 1.5 oz per gallon for best results. If needed, you can even spray this in the home around baseboards where they might be entering. But for the crawl space (if you have one), read below.

VIDEO TIP OF THE WEEK