Fox are prevalent throughout the United States. There are four main fox species active in North America. This includes the the Swift and Kit fox, which is found in the western part of America and the Gray and Red fox which is found on both sides of the country.

Like the coyote, fox have learned to live amongst man. They have adapted well to urbanization and have learned to take advantage of man while living in our backyards. Watch this short video to see a Red Fox walking around in the woods.

Fox are well adapted to live around man and here in the United States, they will be found around all major cities and urban areas. Mostly nocturnal by nature, fox will adapt their feeding patterns to fit the terrain. They prefer to hunt at night but will forage into the morning hours after dawn to harvest local animals.

Fox will feed on a variety of food. This includes carrion, rodents, insects, fruit, vegetables, small animals like pets such as cats or dogs, livestock and birds. Fox tend to be more solitary and only are found in pairs during mating season.

Fox are not known for their speed but rather their ability to move about undetected and silent. They are able to stalk the smallest of prey with precision eyesight and deft hearing. Female fox will have 3-10 pups from March to May, depending on the part of the country. Fox are solitary. Their den will only house a female and her young.

Fox become a problem when their feeding leads them to our gardens, livestock or pets. But sometimes the damage they do can be hard to find.

Fox love pheasant, quail, chicken and turkey. They also love eggs and can cause huge financial losses to both the commercial farmer as well as the weekend gardener.

As people build ponds stocked with fish, turtles and other live animals, fox will find these areas and quickly learn to feed on the bounty. Such refuge provide a quick meal; these small “ponds” offer no protection for the fish and wildlife man tries to keep as pets.

Its hard to blame the fox for their actions. In the wild, their feeding serves a purpose. However, in urban areas, conflict is now occurring. This video features a young red fox which is perfectly comfortable coming into the back yard of a home in a residential neighborhood and bedding down for the day. The “noise” heard in the back ground is the air conditioner compressor located just 20 feet away.

Homeowners are now more likely to see a fox in the wild more than in any other time of our countries existence. These animals are fun to watch and many times welcomed when first found. However, be aware of their presence.

Small pets are particularly vulnerable to attack by fox and are no match for a wild fox. Both cats and dogs are easy prey as well as all the beautiful birds, squirrels and chipmunks around the bird feeder.

If you are seeing a lot of activity by a local fox, be careful. They have been known to carry the rabies virus as well as other disease. Remember, a fox is not a “dog” which wants to be petted and you should never feed them intentionally.

HOW TO REPEL A FOX FROM THE YARD ^

Because of the damage they can do to fish, birds or pets, local fox activity can sometimes need to be controlled. This can be done using a range of live traps including snares, leghold traps and live cages. You can also repel them from your property so they don’t get comfortable on your land. For the average homeowner wanting to safeguard their pets, fish or children, this can be done using our SOUND REPELLER.

Our Sound Repeller is quite unique in that it has many features not common to most any similar device. Be default, it uses ultra sound when triggered. This sound alone can be enough to drive any fox from the area. But our unit also uses a light bar to flash a bright LED light. And there is an optional “audible” sound you can dial on up to 100 DB’s. This sound will vary and often times is enough to keep any wary fox from coming around.

Our units can be powered using 4 “C” cell batteries or the included AC power supply that comes with each unit.

For fox, you’ll get fine results relying on batteries and the motion detector to trigger the unit on. When used this way, the unit will sense motion from up to 40-50 feet away and turn on for 20 seconds. During the time its on, the ultra sound will be sent out along with an audible sound (assuming you’ve dialed up the volume) and the light bar will blink (if the unit is triggered at night).

Units come with a handy remote wireless “key” so you can turn them on/off as needed. This key has an “alarm” button too which triggers a super loud audible blast so if needed, you can use this to spook intruding fox or other animals too.

Units should be placed 3-4 feet above ground and pointed in the direction where animals are entering as well as “over” the turf you want to protect. 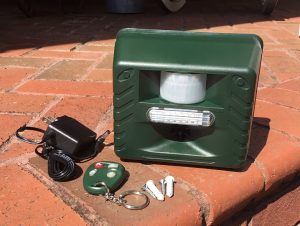 To trap a fox, you can use leghold, snares or cages. Leghold and snares have been used to catch many fox and though catching fox in live cages is thought to be hard, it can be done. 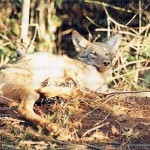 The most common type of trap used for fox is the leghold. This includes both COIL and LONG SPRING design.

Leghold traps can be used many ways and are really only as limited as your imagination. If you are an experienced trapper, you probably have a list of “go to” sets.

As a beginner, we suggest you get our FOX AND COYOTE BOOK which details several methods and sets.

Common places to trap a fox are where they den, where they trail and where you find paw prints. Other tips and trapping “tricks” are covered in the book making it a good read for anyone wanting to learn how to live trap fox (and other canine species).